Not Rated from 0 reviews
0/5
0% of guests recommend

Discovery Centre Vietnam, fantastic street food, the fabled Hai Van Pass, and a growing collection of cafes, restaurants, and bars, it’s no wonder the residents of Da Nang sport some of the broadest smiles in the country. Da Nang is a true beach city. The warm sands of My Khe Beach sweep south from the mountainous Son Tra Peninsula...

Your passport must valid for at least 6 months

Accommodation as above or similar

We do everything to provide accurate cost but we don’t guarantee until the tour is confirmed and paid because fare, rate, tax and other travel service fluctuated regularly at the moment.

Activities for today: Our guide will meet you at Da Nang airport. On the way transfer to Hoi An, stop for visiting the Cham Museum containing the finest collection of Cham sculpture in the world.

Enjoy the lunch at local restaurant. Transfer to Hoi An, a major Asian trading port in the 17th and 18th centuries and its architecture and relaxed lifestyle has changed little over the years.

Afternoon, take a walking tour of the Hoi an ancient town center to visit former merchants’ houses, the 400 year-old Japanese Covered Bridge and the colorful market. Dinner at Indian restaurant. Overnight in Hoi An.

+ Cham Museum: The Cham Museum's first building was opened in 1919, it is famous with its Cham sculptures.

+ Japanese Bridge: The bridge was constructed in the early 1600s by the Japanese community, roughly 40 years before they left the city to return to Japan under the strict policy of sakoku enforced by the Tokugawa Shogunate, and renovated in 1986. Today, it's the symbol of Hoi An.

+ Chinese Temple: It's called the 'Assembly Hall of the Fujian Chinese Congregation' and Built in 1757.

+ Vietnamese former merchants house: 200 years old house ever the place for Vietnamese merchants to have meetings and share information.

Activities for today: After breakfast. Check out hotel. Visit the capital and religious centre of the former Champa Kingdom, My Son. Here, 40km southwest of Hoi An, in a lush green valley, are dozens of red brick towers and sanctuaries dating from between the seventh and thirteenth centuries. Visit the museum and the holy site. Lunch at local restaurant.

Then move to Hue ancient town via the scenic fishing village of Lang Co and the Pass of Ocean Clouds. we visit Imperial Citadel from where the Nguyen Dynasty ruled between 1802 and 1945. Have dinner at Halal restaurant. Evening: Enjoy traditional music by boat on Huong river. Overnight in Hue.

+ My Son Holy Land: is a cluster of abandoned and partially ruined Hindu temples in Vietnam, constructed between the 4th and the 14th century AD by the kings of Champa (Chiêm Thành in Vietnamese). The temples are dedicated to the worship of the god Shiva, known under various local names, the most important of which is Bhadreshvara.

Mỹ Sơn is located near the village of Duy Phú, in the administrative district of Duy Xuyên in Quảng Nam Province in Central Vietnam, 69 km southwest of Da Nang, and approximately 10 km from the historic town of Trà Kiệu. The temples are in a valley roughly two kilometres wide that is surrounded by two mountain ranges.

From the 4th to the 14th century AD, the valley at Mỹ Sơn was a site of religious ceremony for kings of the ruling dynasties of Champa, as well as a burial place for Cham royalty and national heroes.

It was closely associated with the nearby Cham cities of Indrapura (Đồng Dương) and Simhapura (Trà Kiệu). At one time, the site encompassed over 70 temples as well as numerous stele bearing historically important inscriptions in Sanskrit and Cham.

+ Imperial Citadel: It is comparatively modern in European terms. Built over thirty years in the early part of the 19th century, the Citadel encompasses three ‘courts’ covering a total of 6 km.

Activities for today: After breakfast, you will take a boat trip on the romantically named Perfume River visits Hue’s best-known religious site, Thien Mu pagoda. Then, we visit the mausoleum of former emperor Minh Mang. Lunch at local restaurant.

In the afternoon, we will visit the elaborate mausoleums of Emperors Tu Duc and the Dong Ba market. Enjoy traditional music by boat on Huong river. Dinner at Halal restaurant. Overnight in Hue.

+ Perfume River: It is a river that crosses the city of Hue. In the autumn, flowers from orchards upriver from Hue fall into the water, giving the river a perfume-like aroma, hence the soubriquet.

+ Thien Mu Pagoda: Built in 1601 between a river and a pine forest, the Thien Mu Pagoda ("Heavenly Lady Pagoda") in Hue is one of the oldest and prettiest religious buildings in the country.

+ Royal Tomb of King Ming Mang: It is the final resting place of one of the Nguyen Dynasty's staunchest Confucians, whose reign represents the apex of Nguyen power over the country.

+ Tomb of Tu Duc: It is built for the Nguyễn Emperor Tự Đức and took three years to build from 1864–1867. It is divided into a Temple Area and a Tomb Area.

+ Dong Ba Market: one of the romantic Hue's symbols. What consists in the attraction towards this market is the preservation of ancient distinctiveness. Tourists can see all the typical features of a traditional Vietnamese market.

The cave was discovered by a local man in 2005 and the first 5 km of this cave was explored by explorers from British Cave Research Association in 2005, the whole 31 km was explored and publicly announced by the British cave explorers.

This cave is 31 km long, longer than Phong Nha Cave which had been considered the longest cave in this national park. The height can reach to 72 m and 150 m wide. The limestone formation is also more spectacular than that of Phong Nha Cave.

The British cave explorers were impressed by the beautiful and spectacular stalactites and stalagmites inside this cave and they named it Thiên Đường Cave (Paradise Cave). In 2012, a new species of troglobiontic scorpion species, Vietbocap thienduongensis was found in here.

Activities for today: Have breakfast at hotel. 08:00AM start to visit Ba Na Hills. Located in the Truong Son mountain range 25 km to the SW of Danang at an altitude of 1487m and one hour by road from Da Nang lies the Bà Nà mountains.

Its temperate climate, unspoiled forest, and spectacular views over the city of Da Nang's awe-inspiring bay and the Lao mountain range made Bà Nà a past popular place to retreat for the French. Our first amazing views will start right away, to reach Ba Na Hills we will take a ride via Cable Cars.

The most modern Cable Car in Southeast Asia, visit the Dream Stream Cable car Station and see the panoramic views of Quang Nam - Danang City from high above.

After finishing the first cable car, you will visit the Golden Bridge that has recently gone viral, a France wine cellar, Le Jardin D’amour(consists of 9 gardens) and Linh Ung pagoda.

15:00: Return to the Cable Car to leave Ba Na Hills. Back to hotel, overnight in Danang.

+ Ba Na Hills is a hill station and resort located in the Trường Sơn Mountains west of the city of Da Nang, in central Vietnam. The station, advertised as "the Da Lat of Danang province" by local tourism authorities, was founded in 1919 by French colonists.

The colonists had built a resort to be used as a leisure destination for French tourists. Being located above 1500 metres above sea level, it has a view of the East Sea and the surrounding mountains.

Activities for today: Have breakfast at hotel, free time until transfer to Danang international airport for departure.

Early check in and late checkout at hotels

pick you up at your hotel

Please speak with your guide, To help you order vegetarian meals 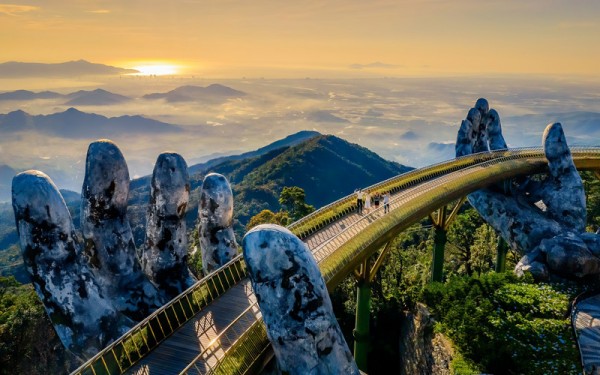 Thoughtful thoughts to your inbox

NEED HELP?
Call Us
+ 84 367833568 whatsapp/viber
Email for Us
sales@vietnamtotravel.com
Follow Us
COMPANY
SUPPORT